Home » Relationship » Do I Have A Narcissistic Mother? What Do I Do?

Do I Have A Narcissistic Mother? What Do I Do?

by admin
in Relationship
0

She sees her own children as a “mini-me”, expecting them to act, behave, and talk in a sure way. Also, a typical narcissistic parent is over-involved in her children’s life, expecting to know what kinds of friends they hang out with, as well as constantly interrogating and checking up with them, asking about every minutia about their lives. A narcissist may depend on her children constantly to meet her emotional needs and perform well in their studies, to maintain a sure image and reputation in society.

Sometimes, one child may be revered and placed in high regard by the narcissistic mother. He is expected to meet all her demands and he is adored by his mother. He is considered to be superior to his siblings, in terms of intelligence, looks, academic achievements, and other desirable traits, such as having a sociable personality.

On the other hand, another child may be assigned the role of a scapegoat. Scapegoat sons are usually the target of their narcissistic mothers’ anger and blame, often serving the role of a punching bag. They are considered to be the black sheep of the family.No matter what they do, they will never earn the good graces of their mothers. Their mothers are often very critical and cynical towards them, using a barrage of insults and degrading remarks to tear them down and destroy their confidence. A scapegoat son will always be considered as uglier, dumber, and less attractive than his prized sibling.

This helps to sow discord between her sons and ignite constant competition and comparisons.

She switches between idealizing and devaluing his son’s qualities so that he will not think that he is superior to his mother.

Narcissistic mothers are quite fond of using intermittent reinforcement. For example, sometimes they might offer the occasional praise or compliment, but otherwise, they will constantly humiliate them, and make them feel inferior. A typical scapegoat son will keep trying to reconcile and develop a bond with his mother, and weather all the accusations and insults hurled at him. Regardless, his narcissistic mother will remind him time and time again that he will never experience success, only failure, and defeat.

Narcissistic mothers are guilty of employing dirty tactics such as emotional incest, by engaging in an intimate relationship with her son. For example, she will be very physically affectionate with her son, and her son will be trying to fulfill all her emotional needs. She might distance herself from her husband at times, letting him play the role of the second fiddle or an inferior substitute.

Narcissistic mothers are also jealous of their son’s girlfriends/spouses, and they will find ways to sabotage the relationship. Those who are completely enmeshed will end up harboring deep hatred for their mothers and they might end up as womanizers. Once their golden child tries to become more independent, they will threaten them with punishments. In fact, when their children successfully break free from this vicious cycle, they will withdraw any affection previously expressed towards them, preferring to be cold and distant.

As for scapegoat sons, once they enter the courtship phase, their mother might “warn” their potential wives/girlfriends about their bad traits/qualities, as well as point out habits or quirks which make them sexually undesirable.

The narcissist may neglect her son, and become completely ignored by his mother and treated as if he does not exist. Deemed as being also needy for her to handle, she will spare no expense to make him suffer if he ever cries out for help. They are put in a position where they had to learn how to take care of themselves at a very early age.

How Do Narcissistic Mothers Affect Their Sons?

A son abused by a narcissist might become a doormat and a people pleaser, allowing people to walk over him. He might be reluctant to accept favors from friends or coworkers.  He may fall victim to people who are fellow narcissists or abusers who intend to suck him dry. Unless he is able to address his codependency issues through therapy, he might end up stuck in abusive relationships. They have trouble exercising their own autonomy and they may not be able to assert boundaries with partners and friends. They never had a chance to develop their own identity and self-worth.

The scapegoat son was never blessed with a healthy relationship with his mother in the first place. Being devoid of love, he might end up with a partner who is abusive and manipulates him to meet her needs. He may also end up becoming a narcissist himself as well.

Someone who has been in this position may feel a deep sense of abandonment and dejection. They may feel that they are not worthy of receiving love and their partners may judge them. Guilt-ridden and ashamed, they will be filled with constant self-reproach. Due to their mother’s codependency issues, they would be worried about becoming also attached to their partners and end up lacking their own autonomy to make their own decisions. However, his partner’s attempt to foster more intimacy may end up making him more cautious and guarded.

My mom cornered me in my room today to discuss my past self-harming… AKA berate me for it, call me gross, and say my previous self is the reason that she gives me zero privacy. I tell her to please leave my room and then she, again, starts listing a ton of other things about me she hates, one being that I’m “verbally abusive” I ask her to explain because LOL, and she says “well you are just nasty and mean and never let me say what I need to” ah!

Invalidating and blaming someone for their problems-it is so typical with abusive parents.

However, my smile turned into a snarl. My mom was actually inviting herself into my new home without me even having it yet. She went on about how she’s going to tag along with me when I move in. What got me the most was when she told herself that I was going to give her my extra apartment key to her. I stared at her and, she started making a scene about how if I’m going to keep a key to her house, then she’s entitled to have a key to mine.

Abusive mothers do not have any concept about boundary setting at all.

How Does a Son With a Narcissistic Mother Cope?

He may live in denial forever, alleging that the abusive behavior never did happen and that his childhood was awesome. 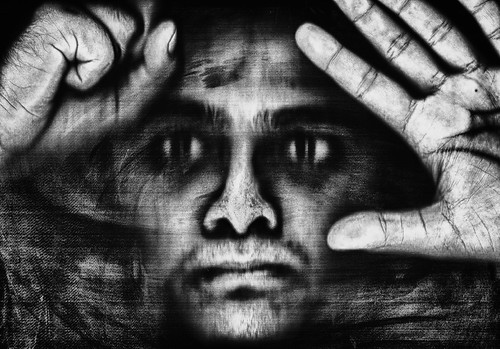 Memories may be involuntarily or involuntarily suppressed, and the abused son might end up forgetting parts of his childhood. However, when the memories resurface, it would be often unpleasant and uncomfortable to deal with.

One might turn to drugs or alcohol to ease the pain within. Getting addicted to computer games, and using it as a form of escape from an abusive past, would be quite common as well.

Relying on others for support

It is essential not to bottle up your emotions, and being able to express them freely will help you lessen your emotional burden and make you feel less isolated. Friends and family members who are not toxic would be able to lend a listening ear and help you process your thoughts.

It is good to let go of any pent up anger and resentment, and there is no point trying to change them. Letting go of the past is very liberating. There is no point being mired in self-reproach and asking yourself: “Why” or engaging in circular arguments with them.

Out of the FOG has very good resources for dealing with narcissistic abuse. Generally, you did not cause the person to become that way, nor can you help her change herself. So do not try to rescue them, do not enable them, but set firm and proper boundaries. The 51 percent rule states that you should take care of ourselves a little more first before we take care of others. The 50 percent rule basically implies that it takes two hands to clap. By engaging with them and not walking away, we are enabling them to continue their abusive behavior. The My Stuff/Your Stuff rule is about not taking accountability for the things which are not in your control, like her abusive behaviors, her mood swings and problems. Their strengths and weaknesses, their identity, their possessions belong to them. Your identity, your strengths and weaknesses, and your personal belongings belong to you.

How To Know When It’s Time For Therapy

As a victim of narcissistic abuse, if you find yourself mirroring your abuser, you may have developed “fleas”. That means that you have adopted some abusive behavioural traits and if left unchecked, you may become a narcissist yourself.

If you find yourself getting flashbacks or constantly having recurring nightmares over the same situation, it is time to go to therapy to address the root cause of the issue. You could have PTSD.

PTSD could affect your work performance and your social life as well. If you feel that various aspects of your life are being severely disrupted, or your emotional pain is very raw and intense, you should probably book an appointment with a therapist as soon as possible.

Addiction spiralling out of control

If you find that you have to open a bottle of wine every night, to drink and drown your sorrows, you may have developed alcohol dependence as a coping mechanism. Alcohol addiction can destroy your liver and cause severe withdrawal symptoms.

Growing up in an abusive household is a harrowing experience, and especially traumatic. During your formative years, your caregivers were supposed to protect you. However, they made you develop insecurities about yourself and the world around you. It is not easy to get away from abusive mothers as they will keep trying to reconnect with you and some people develop codependency with their abusers, making it harder to getaway.

The more you understand yourself, the more silence there is, the healthier you are. —Maxime Lagacé

Keeping Him Interested: 10 Proven Way to Reel Him In

Keeping Him Interested: 10 Proven Way to Reel Him In

7 things to avoid when you are with your crush

6 reasons why mutual compatibility is necessary for relationships