Home » What Causes Your Eyes Red In Picture

What Causes Your Eyes Red In Picture

Why Do Eyes Look Red In Photos?
The image of red eyes in pictures, known as the “red-eye effect,” occurs when a camera captures light reflecting from the retina at the back of your subject’s eye when a flash is used at night and in dim lighting. 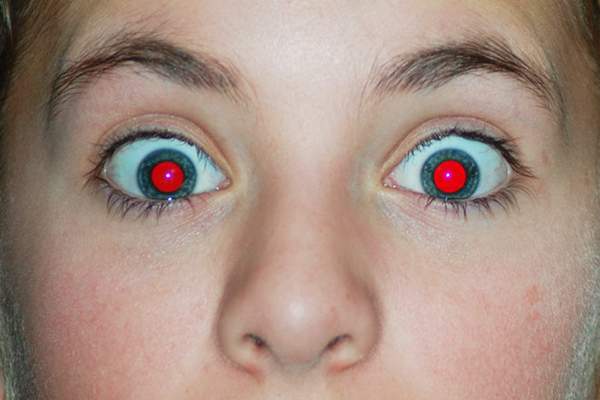 Light rays travel through the cornea and pupil of the eye to focus on the retina, a layer of light-detecting cells at the back of the eye. From here, the retina converts the light rays into electronic pulses that travel along the optic nerve to the brain to create visual images
Eyes look red in photos due to the rich blood supply of the choroid
, a layer of connective tissue at the back of the eye that nourishes the retina and gives it its normal red color.

When a camera flash goes off, the pupils of your subject’s eyes don’t have time to constrict to reduce the amount of light entering their eyes. Therefore, a large burst of light reaches their retinas, reflects, and is captured on film.

How to Keep Red Eyes From Marring Photos of Yourself
.Make the environment  brighter. Before the photographer counts off, rush to the light switch and have the room illuminated to ward off red eyes.

.Has the anti-red eye function activated? Most cameras of today have it, so make sure that it’s on for your sake — and everybody else’s.

.Ask the photographer to switch off the flash, and instead opt for a much faster ISO (the speed of the film). Too technical, but it can help a lot.

.Don’t drink and pose. Alcohol causes the blood vessels to relax, causing more blood to flow in them. The more blood in your choroid, the greater the risk of looking like hellspawn!

.Refrain from standing very close to the camera. Because there’s much more distance for the flash to travel to and from your eyes, your risk of having red eyes can be lowered if you stand as far away from the cam as you can.

.Never stare directly at the camera. Looking somewhere else can keep the flash from hitting the choroid of your eyes, preventing them from glowing most disturbingly.

5 Ways To Stop Yourself From Depression

How to Fake Fuller Lips in Just 2 Minutes

How to Fake Fuller Lips in Just 2 Minutes

Another Matric Exam Paper Has Been Leaked

Lamiez Holworthy loses someone who she loved dearly: “My heart really can’t take this anymore”